Innovation in the production 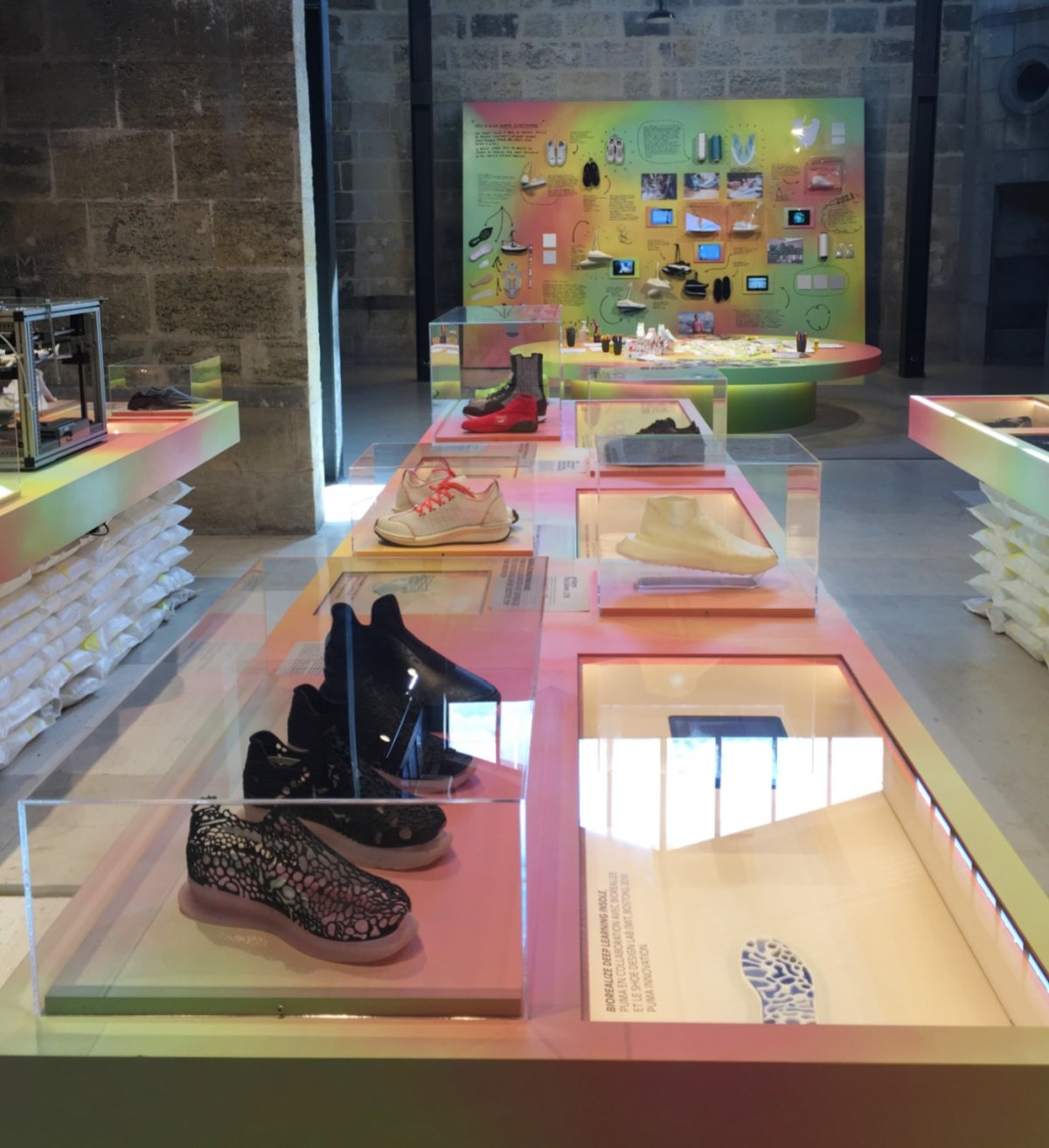 « Innovation in the production » - Exhibition Playground - The design of sneakers, 2020
© madd-bordeaux


Adidas in collaboration with Alexander Taylor et Joachim de Callatay
Futurecraft Leather, 2015
The upper of the shoe is made by CNC milling, an industrial process generally used in the work of metal, resin or polymers. The technique is adapted for leather so that it can be abraded to remove very thin layers and give flexibility or rigidity to the right places. The digital layout of the cutter is designed according to the exact shape of a foot and the specific needs of users. Only one piece of leather is used, no adhesive substance is necessary, the integrity of the raw material is respected. This digital creation process offers such a level of precision that it could be used for manufacturing custom-made shoes, intended for great athletes. The Superstar Futurecraft Leather was produced in 45 pairs only. 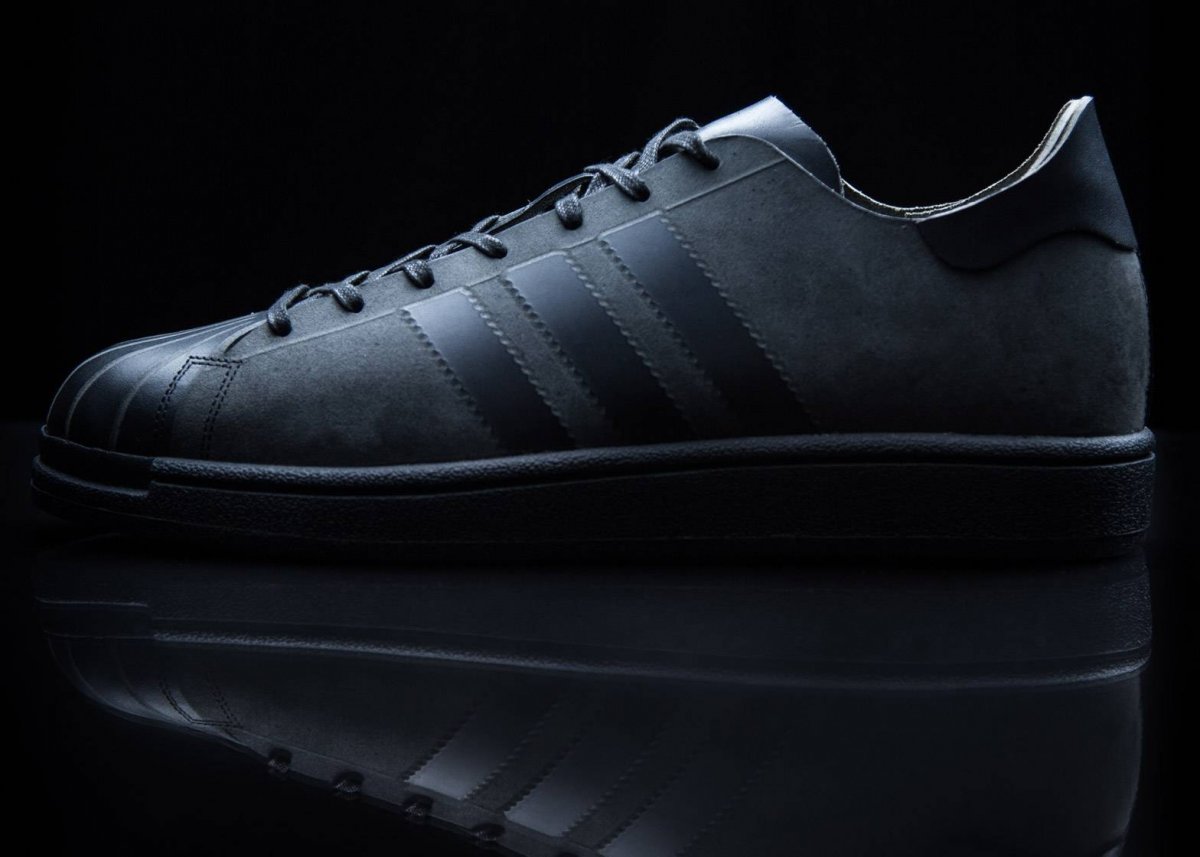 
Adidas in collaboration with Alexander Taylor
Primeknit, 2012
Inspired by the weaving process used for the Slowchair designed by the Bouroullec brothers and produced by Vitra, designer Alexander Taylor developed the Primeknit technology with Adidas. It is a digital control of 3D knitting, allowing to produce the upper of a shoe in one piece, whereas a sneaker normally requires the assembly of 15 to 20 elements.
This technique helps to adjust the necessary flexibility and support for each area of the upper, in order to offer the user a perfect fit, that follows the curves and movements of the foot, as well as maximum comfort and support.
A few months after the launch of Primeknit, Nike sued Adidas, claiming to have patented the same technology that they named Flyknit. Adidas stated that this weaving technique dated back to the 1940s and the court agreed with them. The two brands were authorized to sell their products made with the knit technique.
Released for the London Olympic Games in 2012, Primeknit has been used for different models since, such as running, football, tennis or basketball shoes. 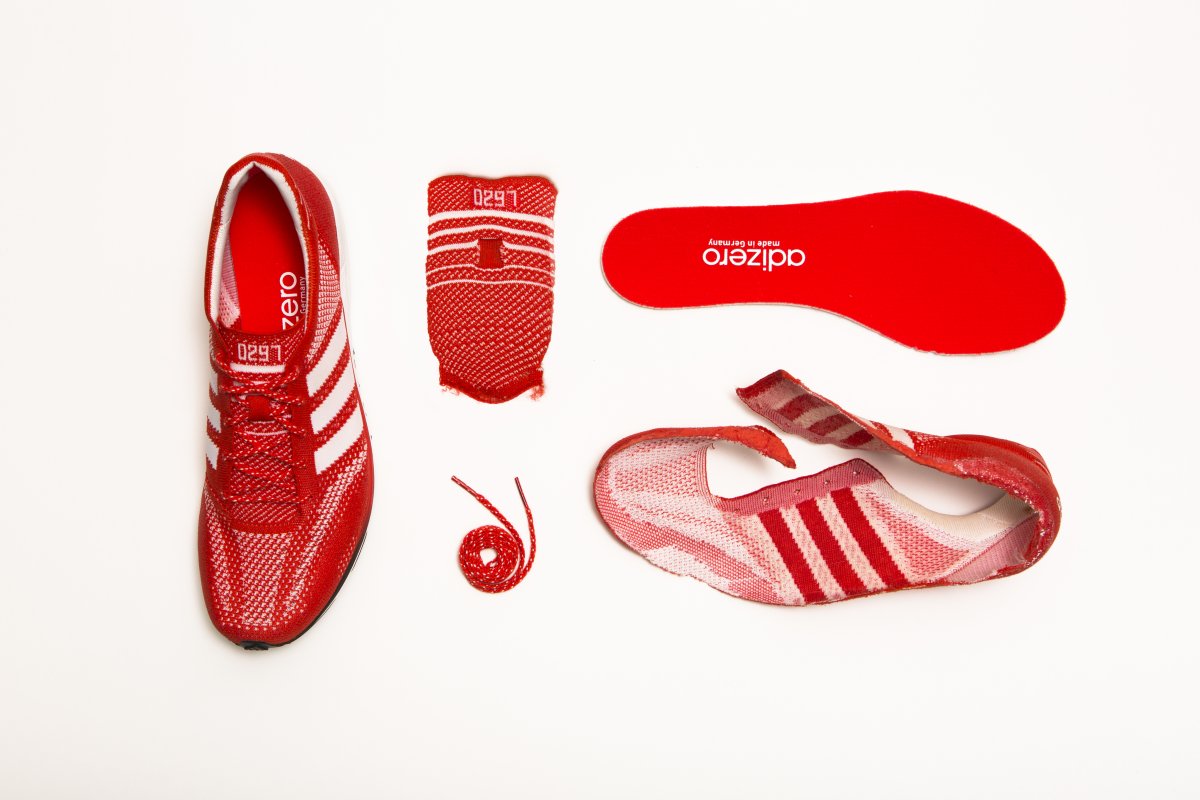 Jen Keane, This is Grown, 2018
Jen Keane graduated from Cornell University (New York), majoring in fiber science and clothing design, and got a master’s degree in « Material Futures » from Central Saint Martins in London. She tends towards a closer dialogue between science, design and industry, in order to bring real changes to our production means. She uses the latest technologies to conceive a new generation of hybrid textile materials, offering an alternative to plastic. With her project This is Grown, she modifies the growth process of the bacteria k.rhaeticus to weave the upper of a shoe. The cellulose produced by these bacteria becomes a material that is both resistant and light, which offers a potential for designing textile objects. The upper is produced in one piece, no sewing necessary and no waste of material. With this project, Jen Keane won the Techstyle Award in 2018 and obtained a residency at Mills Fabrica in Hong-Kong. 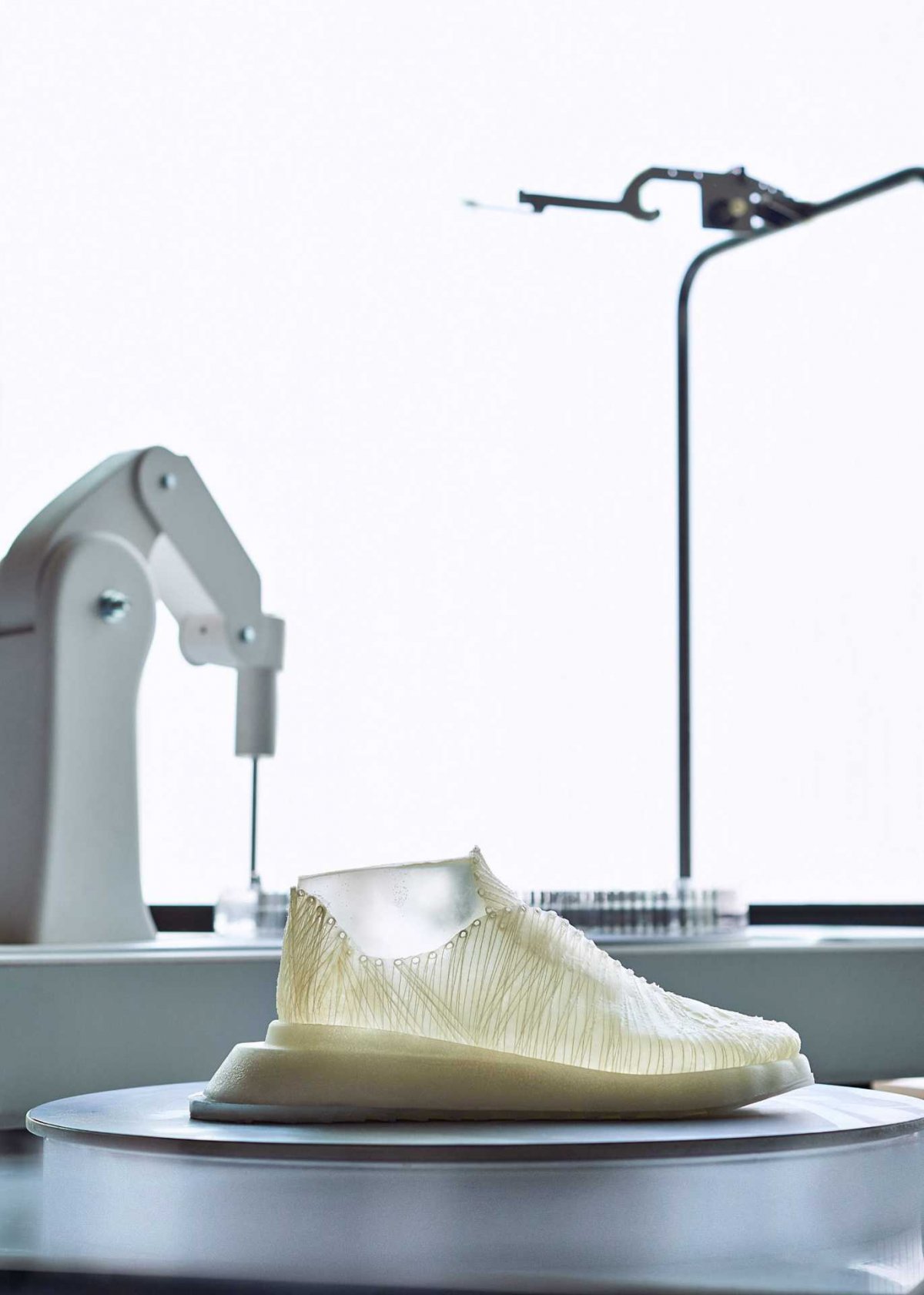 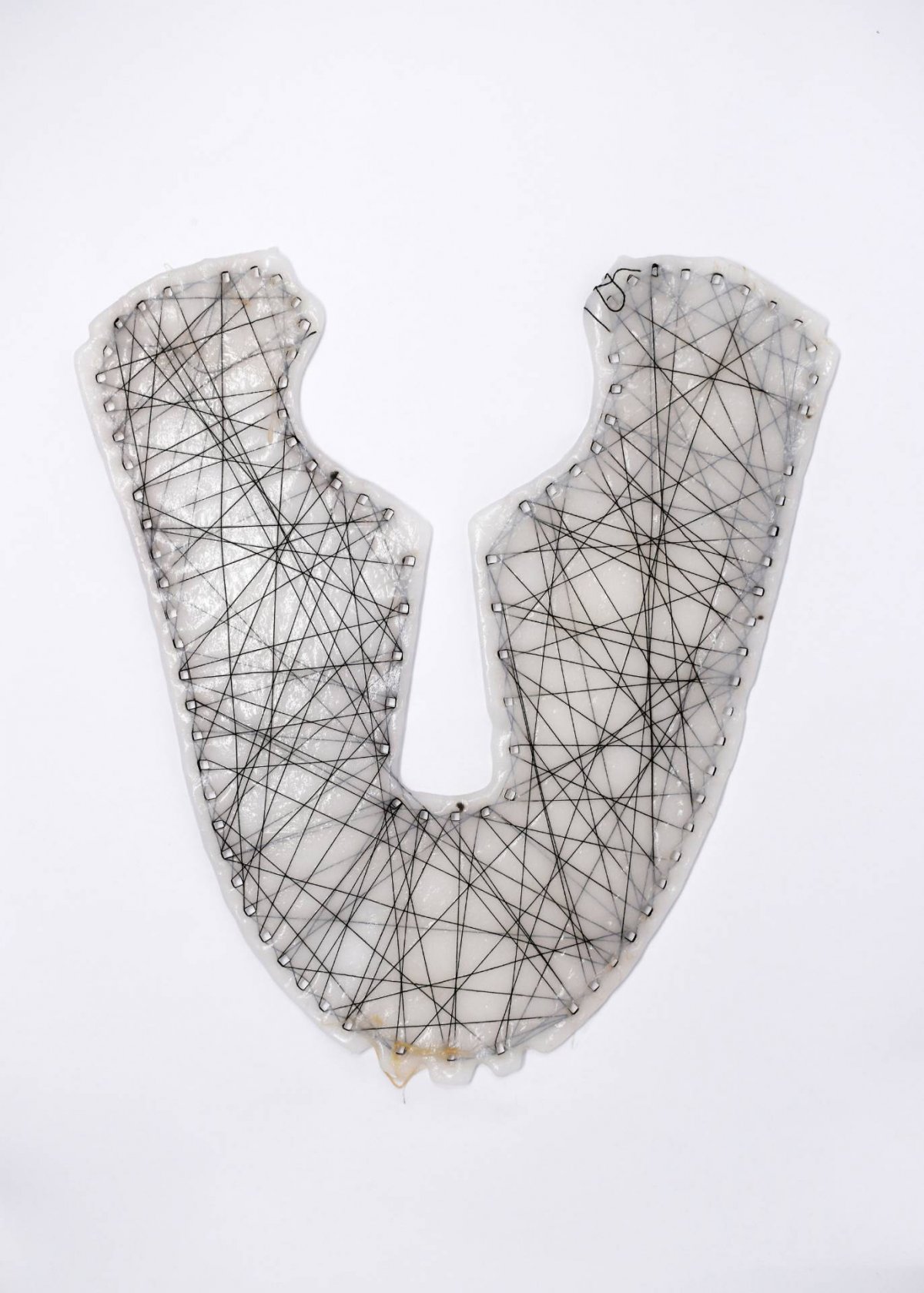 
Julien Chaintreau, Update Ltd, 2017
Each year, thousands of sneakers are thrown away. They can be worn but cannot repaired. The overproduction issues and sneakers obsolescence led Julien Chaintreau to develop a sustainable project: a model with a modern look, equipped with the technology of sneakers combined with the durability of traditional leather shoes. The construction of these shoes, based on sewing, allies the advantages of craftsmanship with a new process, integrating 3D printing and innovative textiles. All this results in Update Ltd, sneakers whose wear is anticipated, and which can be therefore repaired by a shoemaker. This diploma project, presented at ECAL (Lausanne) in 2017, proposes a better control of the obsolescence of a product while allowing some crafts to resist to mass industrialization. 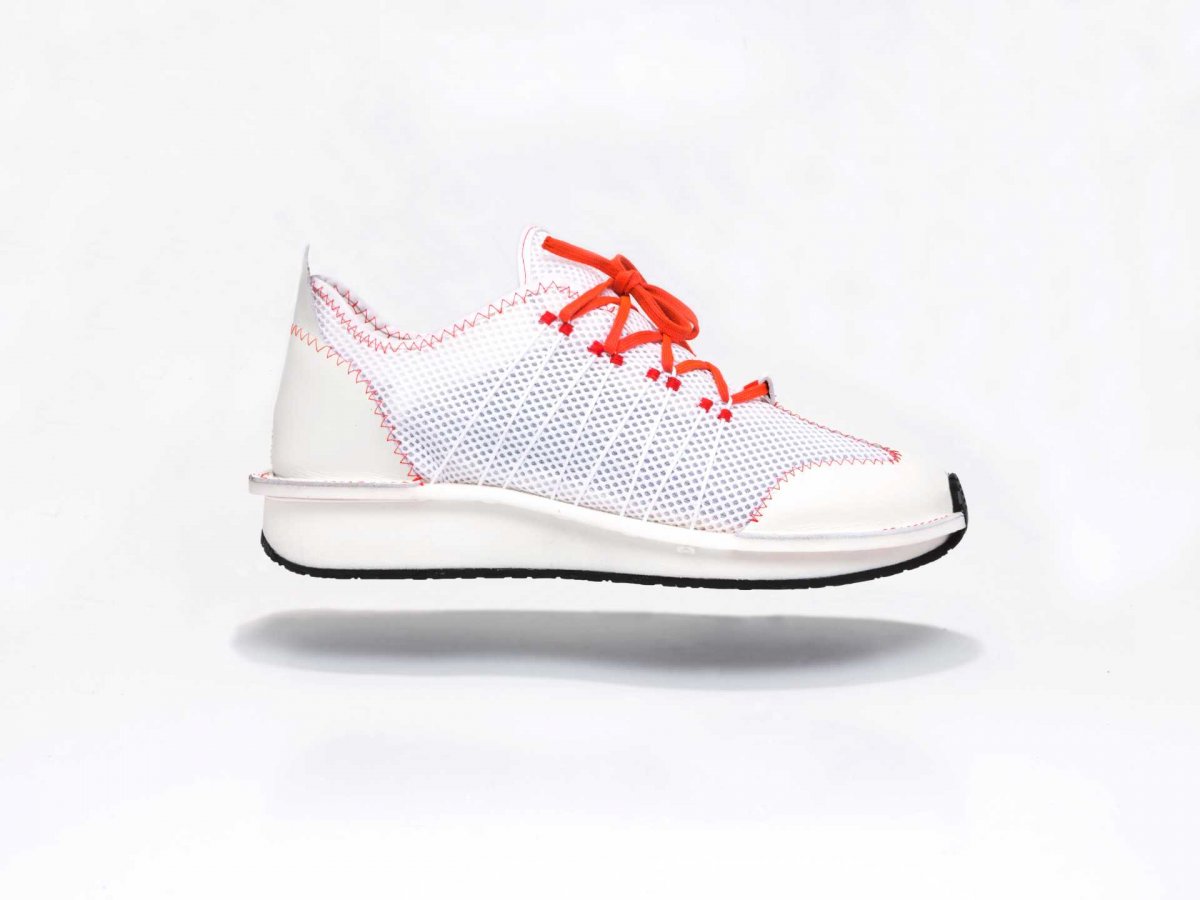