The scandals of the 1990s unveil the many disasters of an industry considered as one of the most polluting in the world. Big brands are forced to act and invest into research. New production modes are conceived to better respect the environment. Large sums are invested to reduce the carbon footprint, but there is still a long way to go.

What is an eco-friendly sneaker? One that’s madewith recycled plastic or locally produced? Sustainable, environmentally responsible, ethical, zero-waste, vegan, all of the above? Different brands have different answers, but they all share the same goal: to take advantage of the collective fervor surrounding sneakers while striving to minimize their ecological impact. At the risk of creating a few paradoxes…

Many thanks to Annabelle Laurent, author of «Can sneakers be truly eco-friendly?», an article to read in the exhibition catalogue. 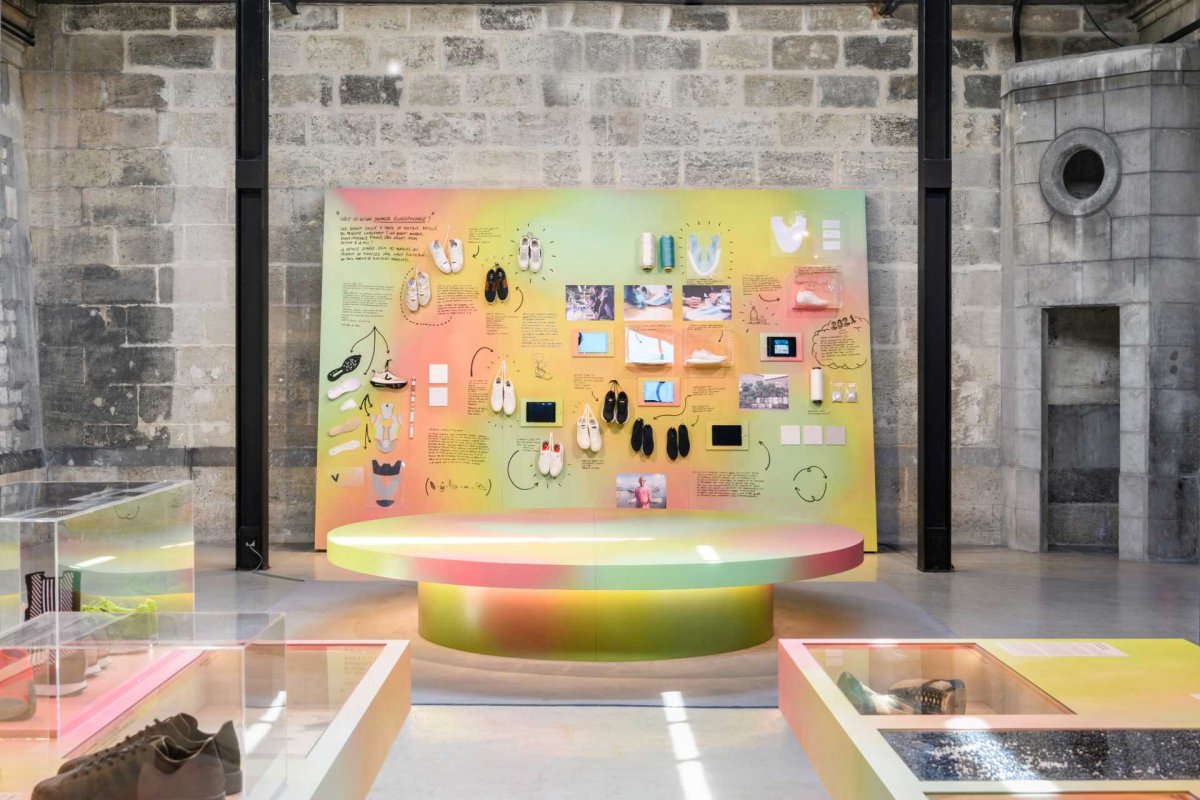 Natural and biobased materials
The French brand VEJA has developed several biobased materials. The C.W.L (Corn Worked as Leather, for example, is a cotton fabric coated with PU and resin from the corn waste industry, a vegan alternative to leather. The Condor combines innovative materials such as Alveomesh made from recycled plastic bottles with biobased materials like Amazonian rubber, banana oil, rice waste and castor oil. The organic cotton used by the brand is produced by farmers associations in Brazil and Peru in respect to the environment and acquired following the principles of fair trade. 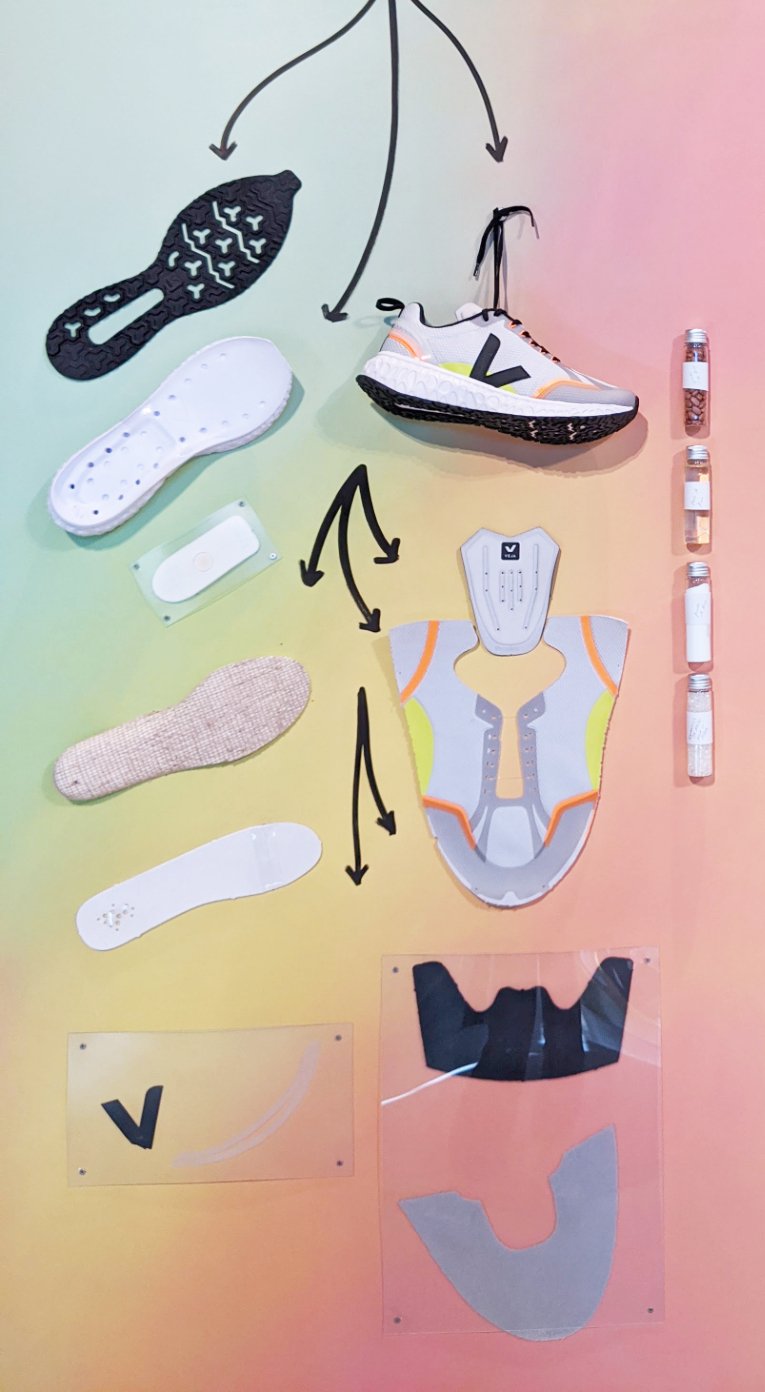 Ecoalf
Founded in 2009, the Spanish brand with the slogan “Because there is no planet B” developed a system for producing shoes and clothing from recycled materials, including marine debris obtained in cooperation with the fishing industry. Ecoalf works with more thousands of volunteer fishermen in Spain and Thailand. More than a ton of waste is recovered from the oceans every day, 10% of which is recycled. Plastic bottles and fishing nets are shredded into fine flakes that are converted into fibers. Much of Ecoalf’s downstream production is carried out in China. The company has been certified by a number of nonprofit associations, including B Lab, whose “B Corp” label is granted to businesses with the “highest standards of verified social and environmental performance.” 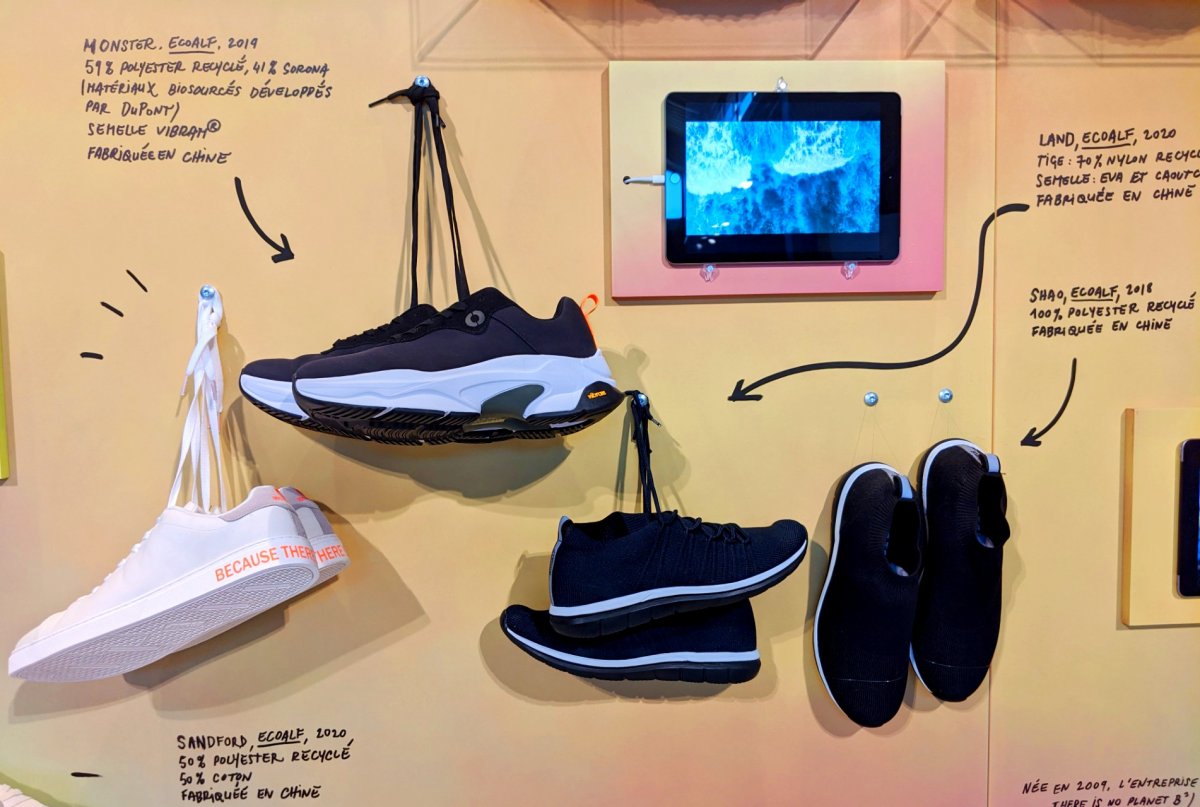 
Faguo
Launched in 2008, the French brand Faguo produces 65% of its sneakers from recycled materials. To compensate for the high carbon footprint of its production in China (Faguo is a transliteration of the Chinese word for “France”) and Vietnam, Faguo plants a tree for every pair of sneakers sold. This initiativehas resulted in the planting of more than 1.5 million trees in some 270 forests in France. 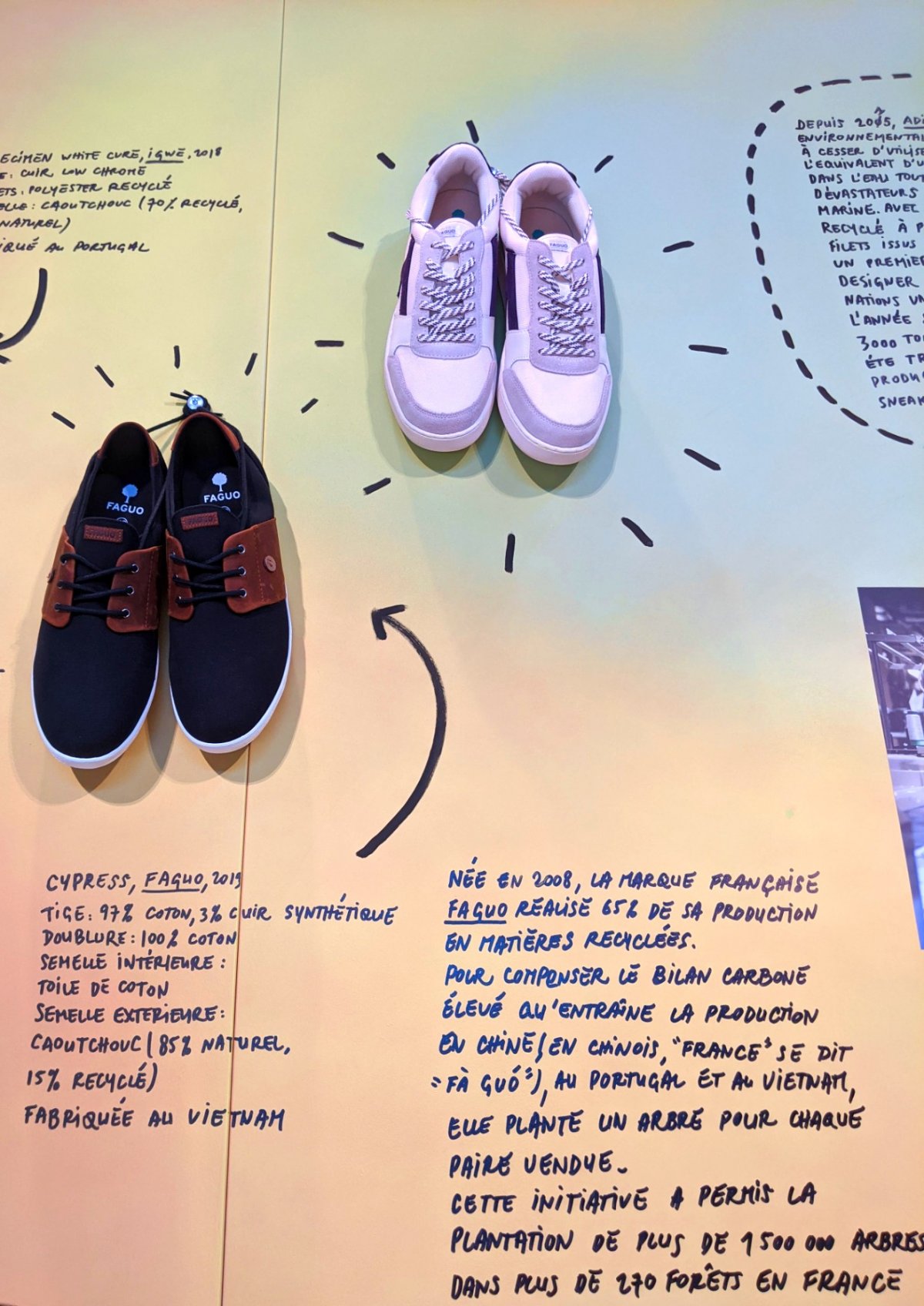 
Jules Mas, All PET Shoe, 2017
While most of football shoes are made out of plastic, leather, resin and glue, All Pet Shoe is composed of different types of PET that can be recycled following the same process as plastic bottles. 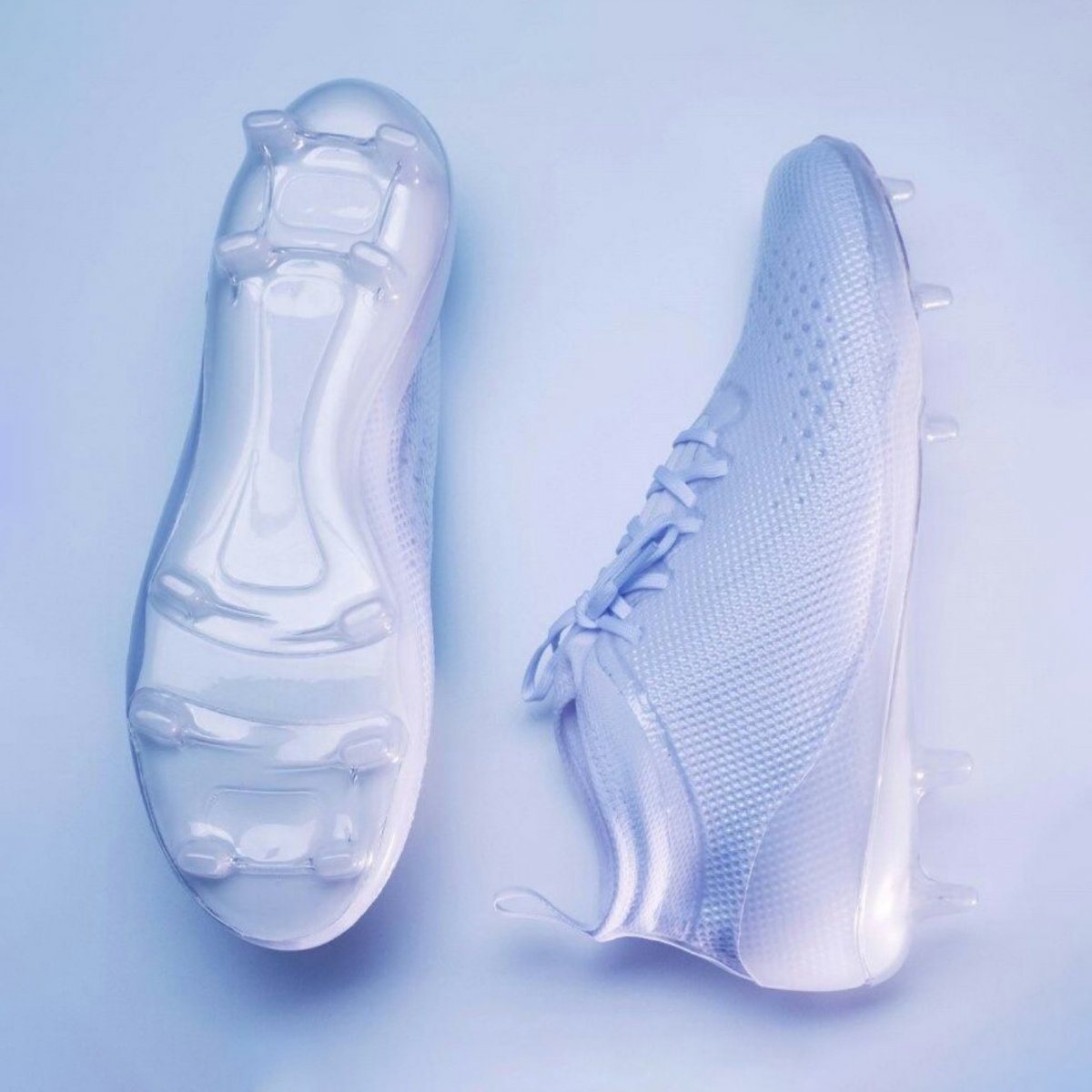 
Adidas x Parley for the Oceans
Adidas has collaborated with Parley for the Oceans since 2015. The environmental non-profit organization calls to stop the use of plastic which pollutes the oceans: the equivalent of a truck of plastic is thrown in the water every minute, with devastating effects on the biodiversity and the marine wildlife. With Adidas they developed a recycled material from plastic trash and illegal fishing nets. The first model of sneaker designed with the collaboration of Alexander Taylor was shown at the United Nations in New York in 2015 and released the following year. Since then, almost 3000 tons of plastic trash have been recycled and transformed, allowing the production of several millions of pairs of sneakers.


Igwe
Launched in 2018, Igwe combines a high-end craft production with strong ecological and ethical values. The French brand produces small series in sustainable materials from Spain and Italy, assembled by hand in a family workshop in Portugal. Igwe collaborates with PimPamPost, a company which uses free spaces in public transports, reducing their carbon emission up to 90%. 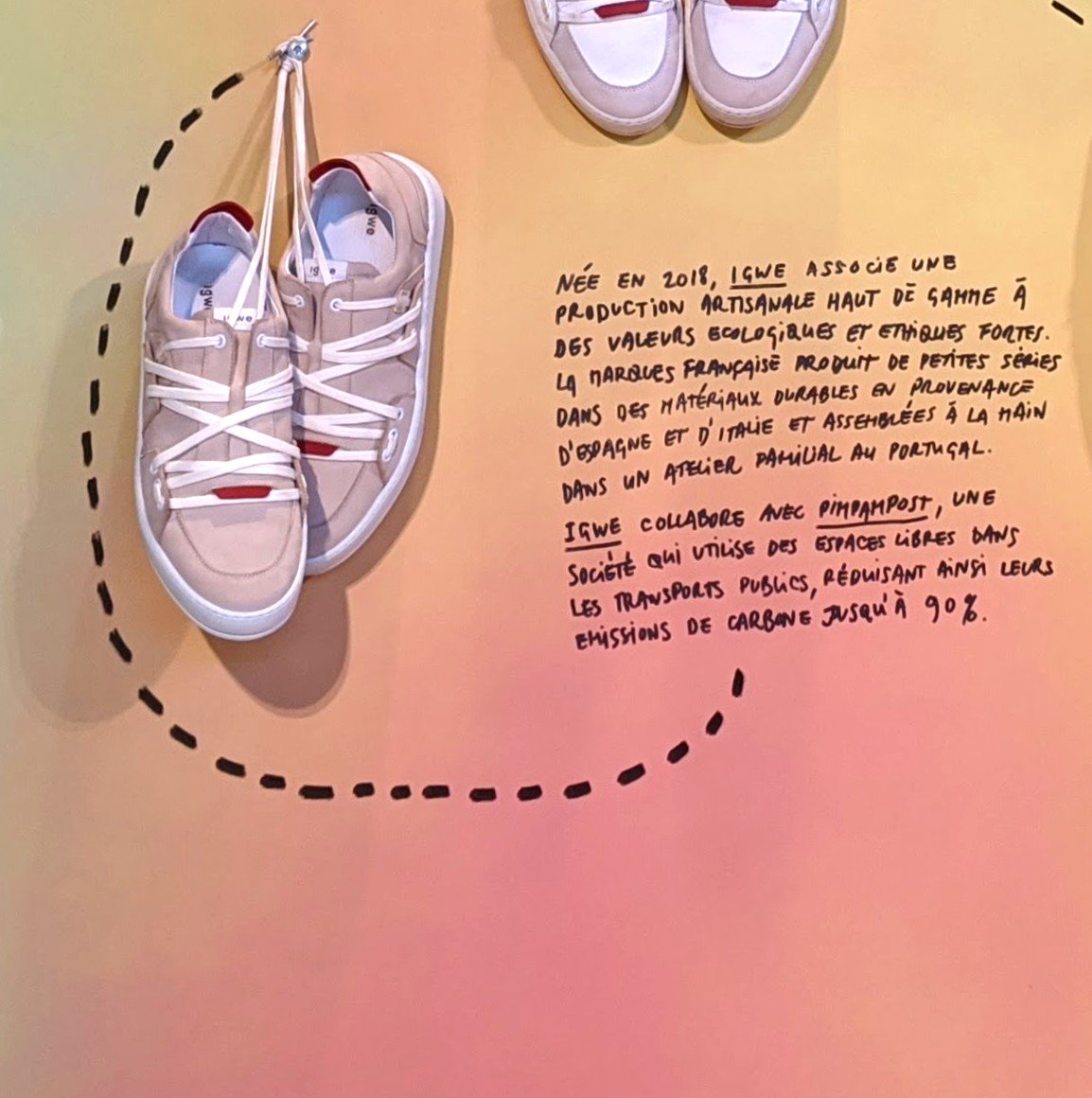 
Adidas Futurecraft Loop, 2021
Adidas announced for 2021 the launch of the first 100% recyclable shoe, fully made of TPU. Once worn, the shoe is sent back by the user, then grinded and recreated. The new shoe will eliminate the use of virgin plastic and will be indefinitely recyclable (hence its name, Loop).