10. A case study: the design of running shoes

The sport world is experiencing a golden age of innovation. It is about finding the right formula for each sport, the one that allows you to go faster, further and higher. Every brand develops their own running shoes, constantly offering new solutions for better comfort, cushioning, weight and propulsion. The runner is the main subject of these researches: manufacturers study the runner’s stride (universal, pronator or supinator), morphology, and weight, to create the most suitable shoes. Clear trends emerge from this race for innovation. From its inception, Nike stood out with the success of the Oregon Waffle, released in 1973, equipped with its famous sole, originally made in a waffle iron, hence its name. Adapting this technique to various models, Nike sold more than 270 million waffles shoes in ten years. At the end of the 1970s, New Balance was the very first brand to propose different shoe max-width:100%;widths, to suit every type of body. In 1984, for the Los Angeles Olympic Games, Adidas innovated by developing the LA Trainers, whose cushioning was adjusted by a system integrated in the sole. Asics with the GEL technology, Reebok with DMX or Saucony with the Grid system, all brands compete with their technologies, promoted by sensational advertising campaigns. While lightness has always been at the heart of technological research, the early 2000s were marked by the trend of « barefoot running », which promoted running without any cushioning. Following this trend, in 2002, Nike launched the Free 3.0 and Vibram released the Five Fingers which fitted like a glove and allowed you to be in direct contact with the ground, to find a « natural » stride again. With new brands like ON popping up recently and the use of new technologies such as 3D printing, the running shoe is keeping up with its metamorphosis, breaking each year new records on the tarmac: there is no finish line. 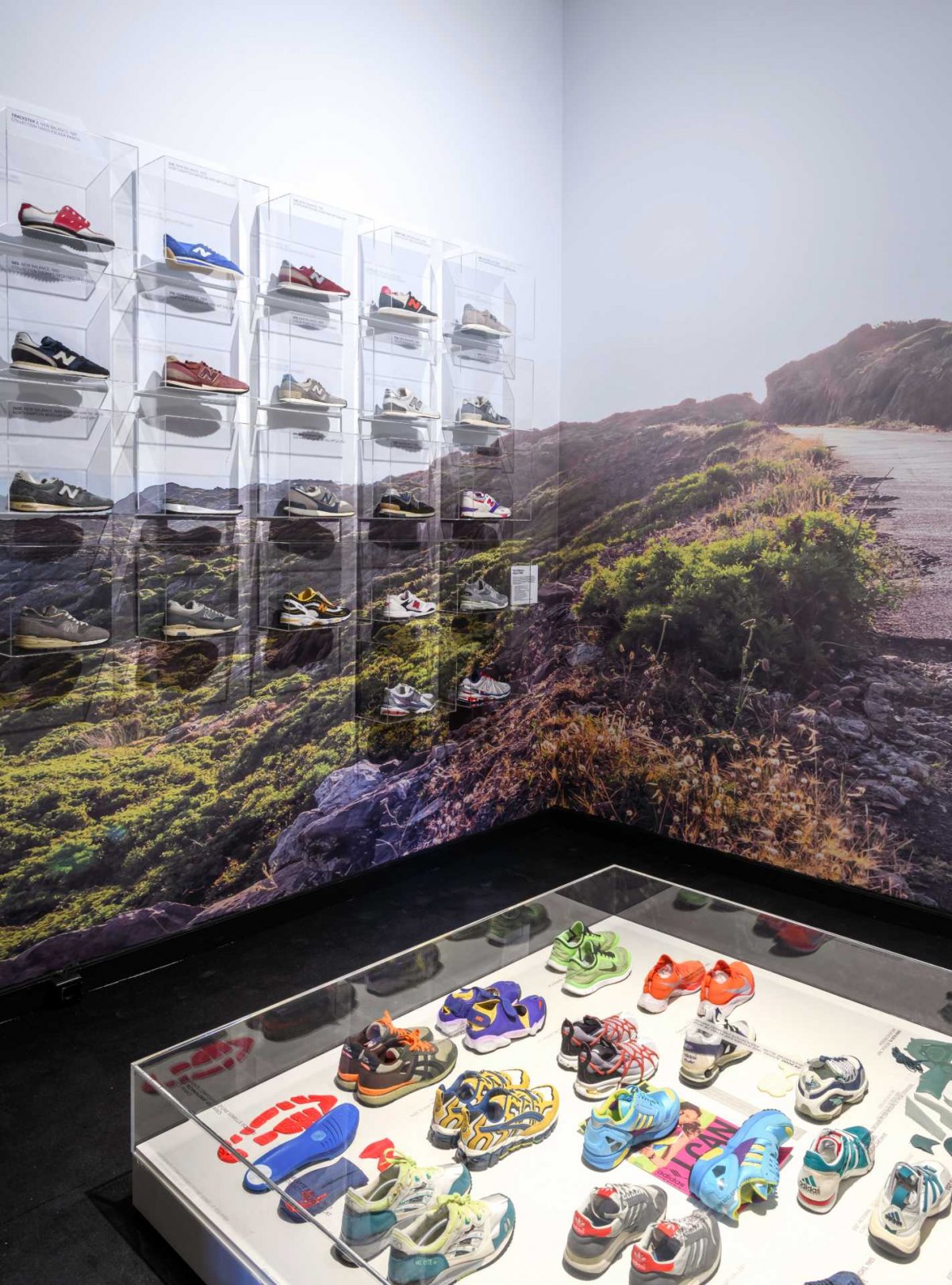 ON, since 2010
The passion for running brought together Olivier Bernhard, biathlon double world champion, and his friends David Allemann and Caspar Coppetti. After many successes in the world of high-performance sport, Olivier Bernhard sought to conceive a running shoe that would bring him the perfect balance. He met a Swiss engineer pursuing the same goal and who already had some ideas for a new model of shoes that would change the feeling of running. Dozens of prototypes were developed but the base idea – a soft cushioning and a dynamic rebound – is the common thread of the concept. In 2014, the brand introduced Cloud, the first model equipped with patented Cloudtec technology, designed to offer a soft landing and a dynamic rebound, while guaranteeing light weight. The outsole is made of hollow rubber pads, shaped like clouds (hence the name), strategically placed under the foot. This model won several excellence awards and the brand rapidly became successful in the sport world, thanks to the silver medal won by Nicola Spirig during the women’s triathlon at the Rio Olympic Games in 2016. In 2018, Matt Hanson, sponsored by ON, broke Ironman’s world record with a time of 7:39:25 at the North American Championships.
ON has extended their offer with shoes for other sports and several innovations: ultralight foam called «Zero-Gravity», very resistant «Rebound Rubber» which contributes to energy return, all-terrain «MissionGrip» sole designed for the trail… 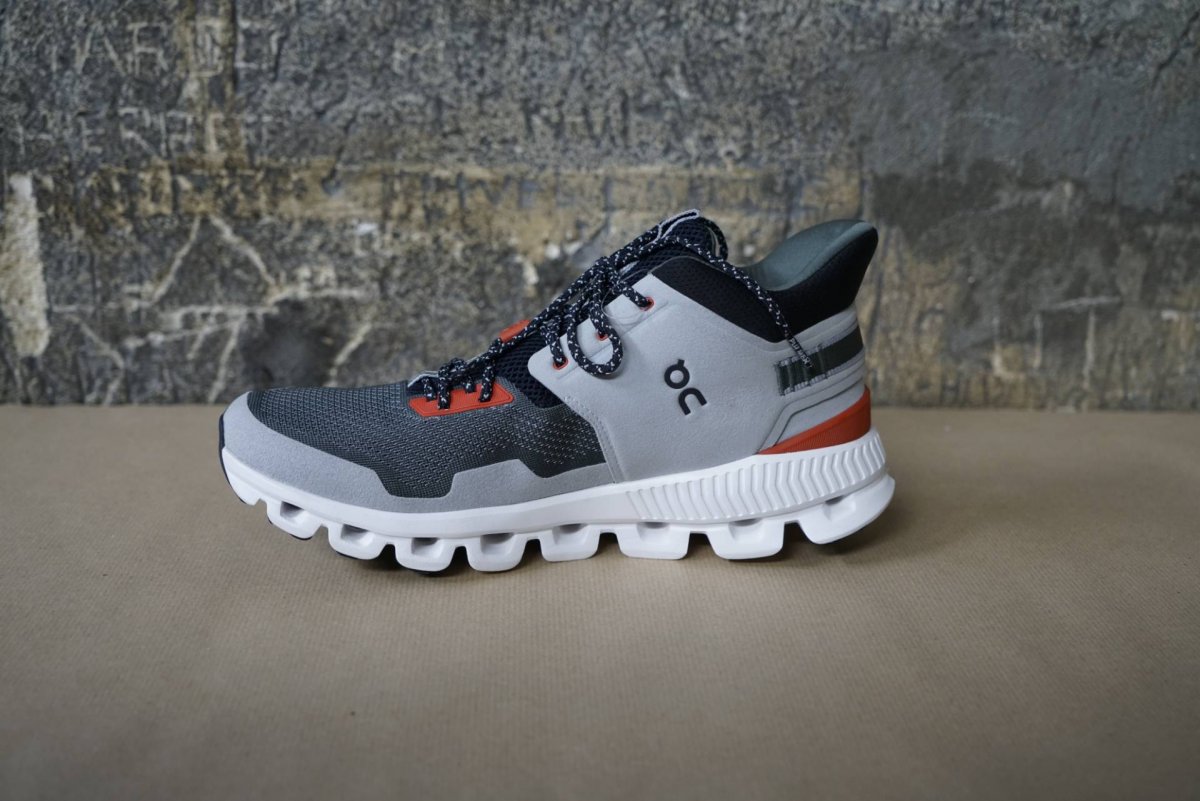 
New Balance, since 1906
« A different shoe for every runner »: here is the promise of New Balance, who distinguishes from its competitors by offering models which, by their shapes and colors, almost look alike. The numbering is there to guide the buyer. The first two figures refer to the overall performance level. The higher the number, the higher the quality, the technical level and the price. The last two numbers indicate the specific features of the shoe:
- 40 Optimal control: control, stability, cushioning and support adapted to pronation.
- 50 Athletic running: for road or indoor training.
- 60 Stability: stability to reduce pronation, while proving cushioning and comfort.
- 70 Light Stability: stability and speed, for fast runners.
- 80 Neutral: for long distances, light shoes with powerful cushioning.
- 90 Speed: light shoes for fast runners.
- 00 Competition: shoes offering performance and speed. 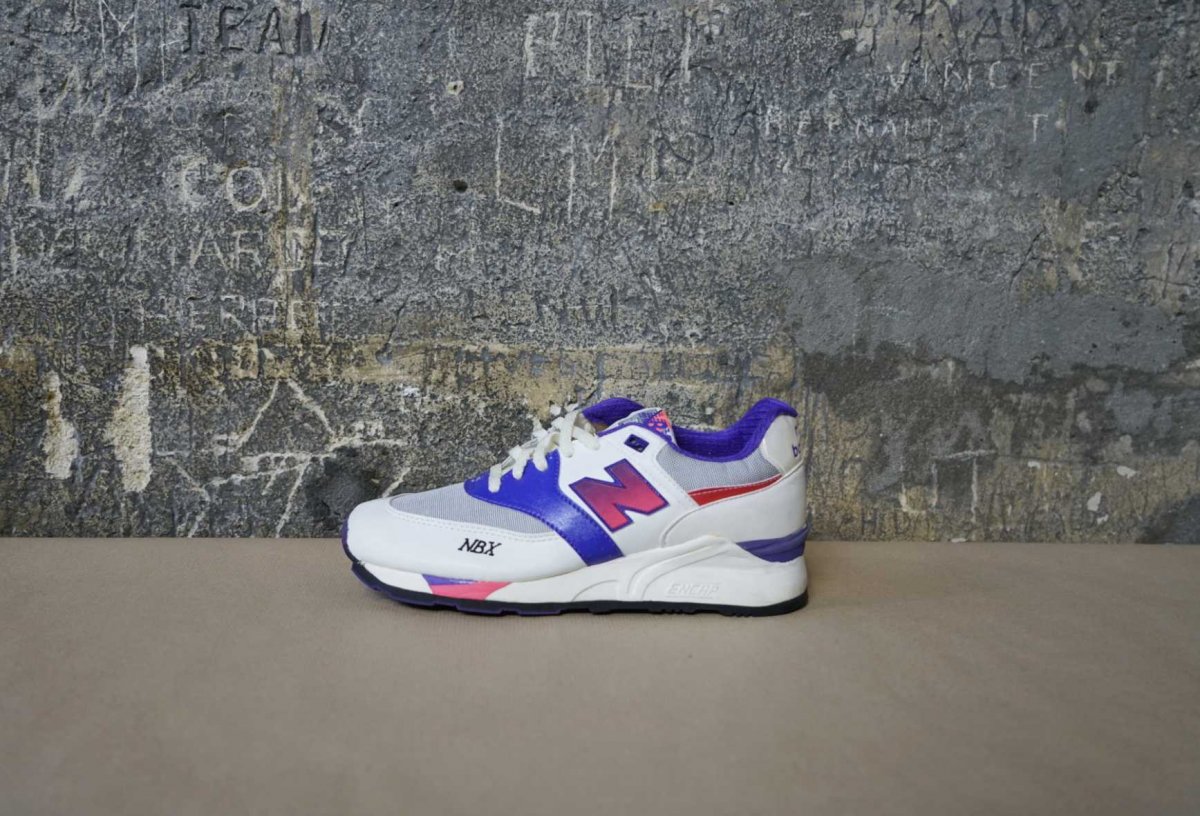 
New Balance
The ENCAP technology, since 1985
Patented by Kenneth W. Graham, Edward J. Norton and Shuhei Kurata
ENCAP technology is a cushioning system located at the rear of the foot, in the midsole. It is made of a resistant polyurethane structure, which follows the shape of the heel and includes, in its center, an EVA foam sole. The combination of these two elements ensures shock absorption and dispersion with each stride. This technology was introduced for the first time on the New Balance 1300. Used for many models since, it is still used today. 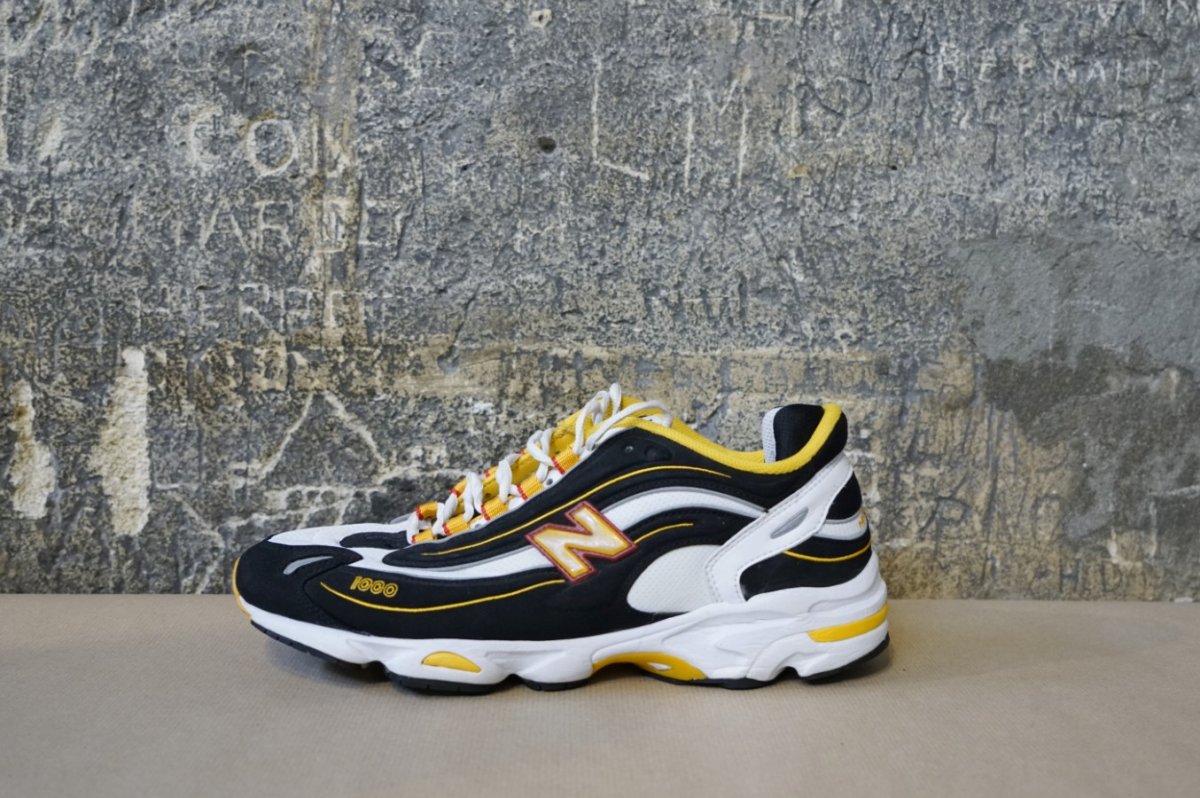 Asics
The GEL technology, 1986
The GEL technology consists of two silicone patches, inserted in the midsole, one located under the heel, the other under the forefoot. Their position, volume and density vary according to the technical nature of the model and the requirements of the sport. The silicone gel reduces the impact when the heel hits the ground and improves shock absorption during forward movements, allowing a smooth transition. Still used today by the Japanese brand, the GEL technology has been used for numerous models.


Adidas
The Equipment (EQT) line, since 1991
Adidas asked Peter Moore and Rob Strasser, two former Nike employees, to create a new line of footwear, centered on the athlete and his needs, following Adi Dassler’s legacy. They conceived a multisport model, whose design only includes the essential. It offers support for the foot with its three flexible bands on either side of the shoe and with the new Torsion system developed in 1988. In 1993, the brand released other versions of this model, including EQT Guidance and EQT Support, which met a great success. In 2004, Adidas decided to relaunch the EQT line and Nic Galway, who designed the Yeezy Boost and the NMD, presented a new range made for the city. The simplicity of the original model has been preserved in the latest versions, which have come one after another since 2012, equipped with Adidas cutting-edge technologies such as Boost and Primeknit. 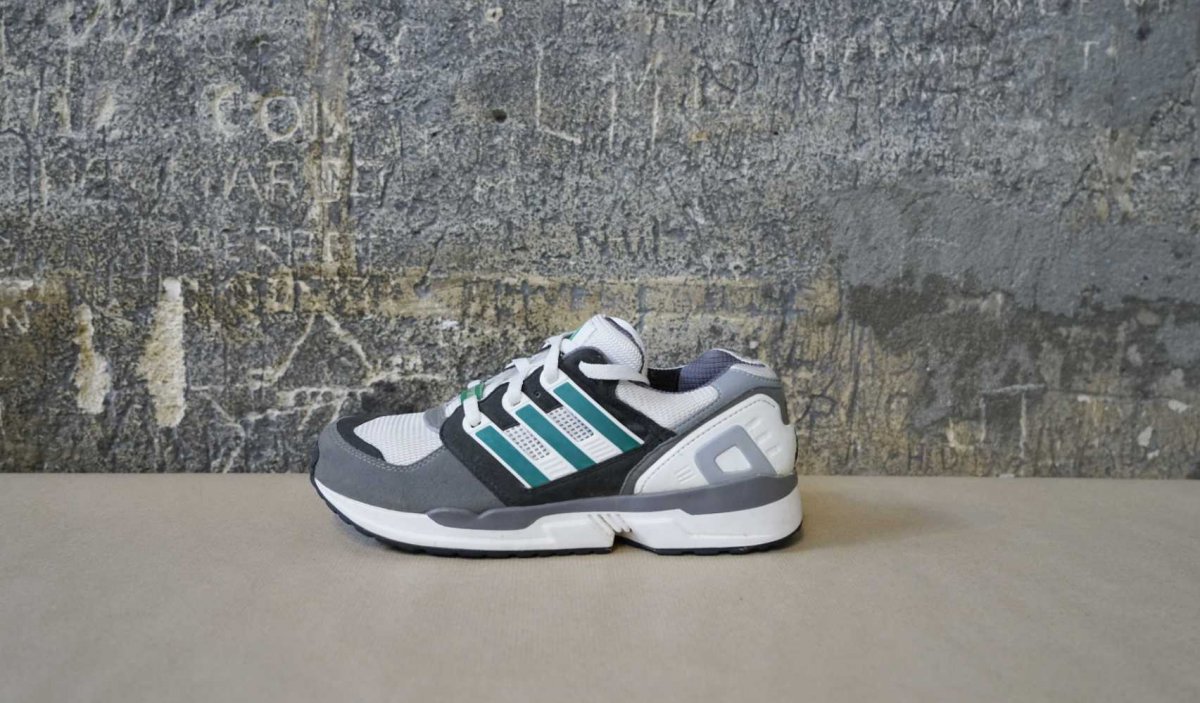 Adidas
The Torsion technology, 1988
A piece of flexible thermoplastic, placed in the sole, articulates the front and back of the shoe, to get the most natural move. The shoe adapts perfectly to different surfaces and is suitable for several sports: it supports the foot of the runners, provides lateral support to tennis players and offers an ideal stability to basketball players.


Reebok
The DMX technology, since 1997
Patented by Paul E. Litchfield, Matthew J. Montross, Steven F. Smith, J. Spencer White, Alexander W. Jessiman
The DMX (Dynamic Motion X) technology consists of a sole made of several air capsules: five under the forefoot and five under the heel, all connected by a central pipe. When the runner is in action, air flows from front to back, depending on the pressure.  Unlike Nike’s Air system made of independent capsules, the DMX technology uses air circulation to provide better balance, stability, cushioning and energy return. 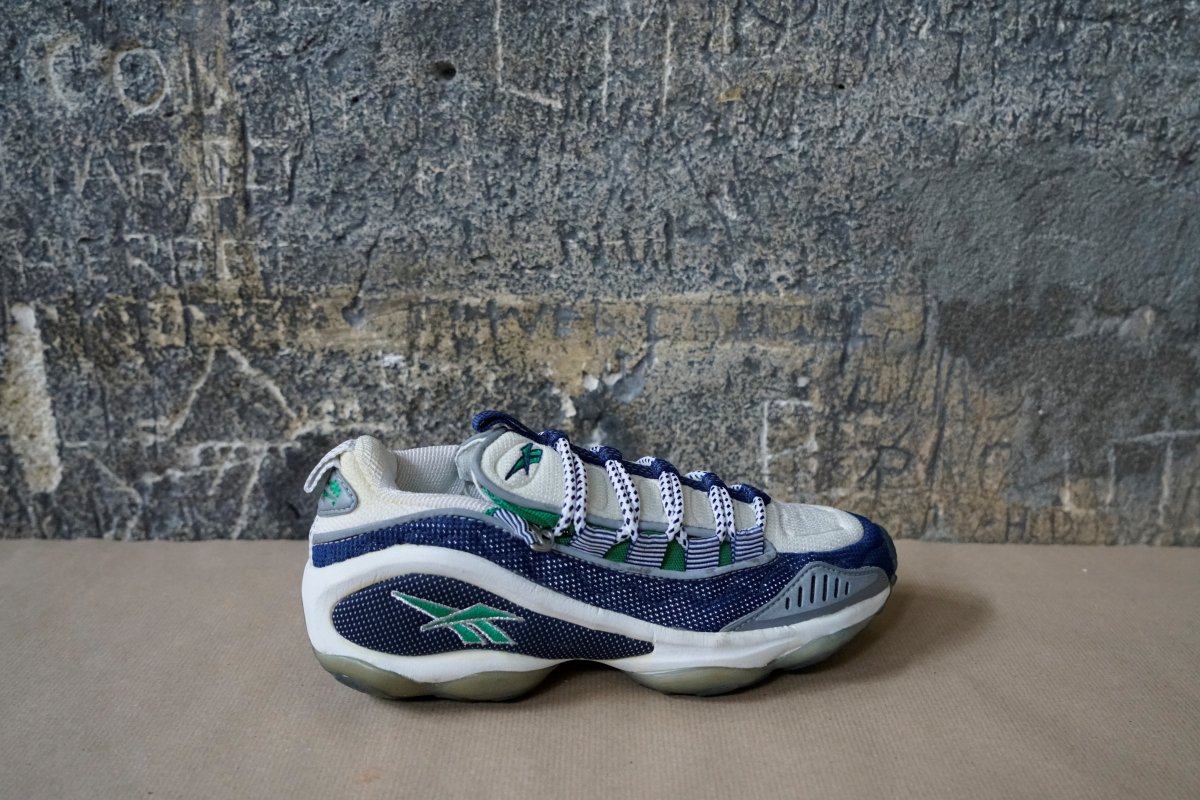 
Nike
ZoomX Vaporfly 4%, Nike, 2019
Worn by the greatest runners like Kenyan Eliud Kipchoge,the Nike ZoomX Vapofly 4% smashed all records, to the point it created a scandal: seventeen athletes filed a complaint to the IAAF about « technological doping », noting that the athletes who wore them ran 4 to 5% faster. The secret of the Nike ZoomX Vaporfly 4% is in its midsole, composed of a flexible and reactive foam called ZoomX, made of a material used in the aerospace field, and of a carbon fiber plate which is the matter of all the questionings. Taking the whole length of the shoe, it assures stability, according to Nike, and avoids « loss of energy when the tip of the shoe flexes ». The combination of the two materials provides optimal cushioning and powerful energy return. 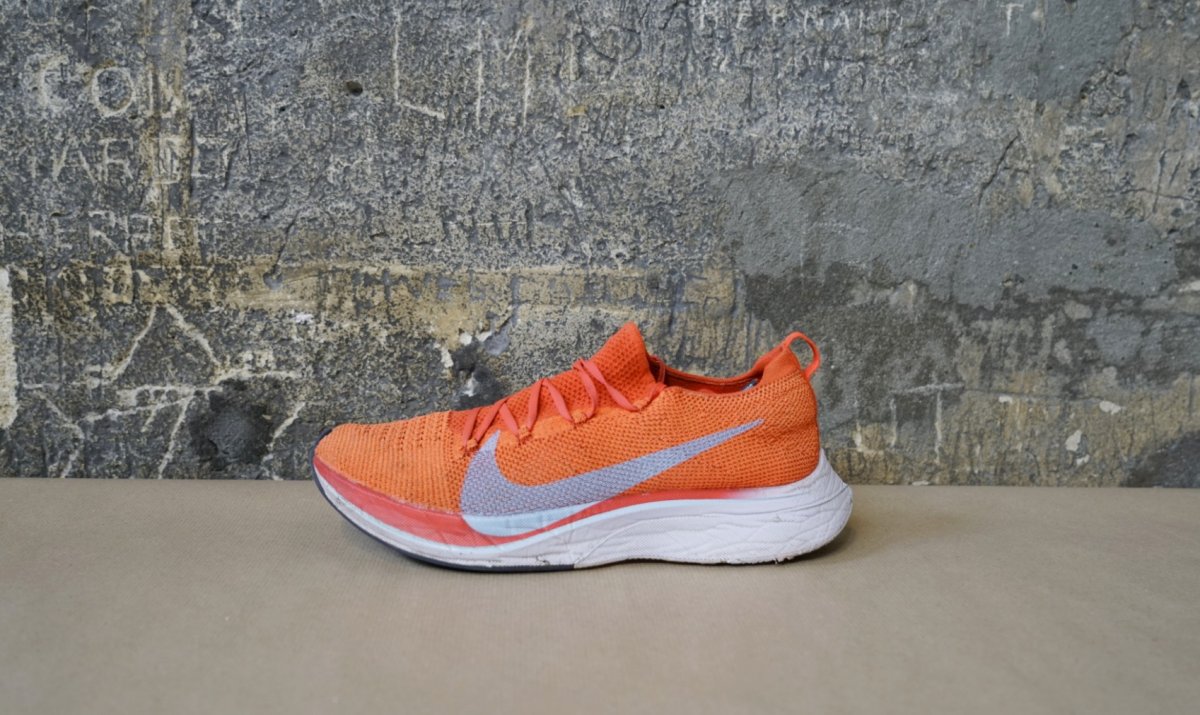