The constant improvement of digital robotics and 3D printing techniques opens the way to a revolution in the manufacturing process of sneakers. Whereas making molded soles is expensive and requires several months of manufacturing, 3D printing simplifies the processes, reduces manufacturing time and stimulates experimentations.

In order to conceive specific tools and suitable materials, Reebok, Adidas and New Balance collaborate with companies specialized in chemistry or robotics, such as BASF, Formlabs or Carbon. The most efficient 3D printing machines still do notstand the comparison with assembly lines and cannotperform certain stages of production. These new machines however help to quickly respond to the requirements of top-level athletes, by conceiving custom shoes, adapted to their needs and morphology,and also encourage us to think about a new productionchain, perhaps better for the environment.


New Balance in collaboration with Nervous System
Generate, 2016
New Balances uses traditional materials for the upper,like mesh, but innovate by making the outsole usinglaser sintering. This requires a highly resistant thermoplastic elastomer called Dura Form TPU, which was developed by 3D Systems. The honeycomb structure of the sole brings comfort and support to the athlete. With data collected from runners and athletes, Nervous System and New Balance have been able to perfect a program allowing to generate different unique soles, adapted to every profile. The different soles here on display show the application of generative design to the sport shoe, allowed by this 3D printing technology. 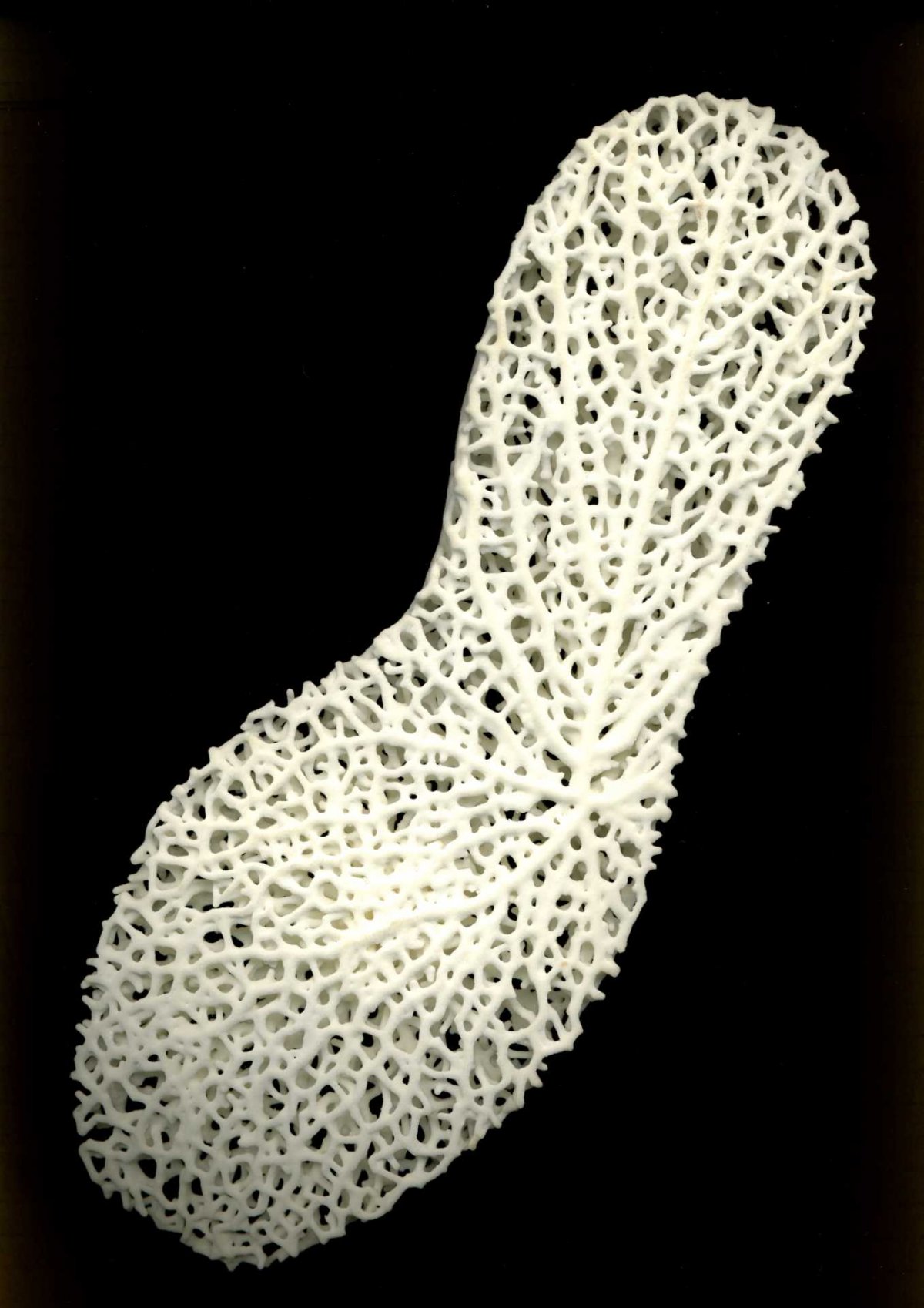 
New Balance in collaboration with Formlabs
TripleCell, 2017
New Balance and Formlabs, leader in the development of 3D printing, have collaborated to develop a new 3D printing material, offering performances way superior than with traditional foams, called Rebound resin, a highly elastic photopolymer. Designed to create soles with a lattice structure that is both flexible and resistant, the Rebound resin has an energetic rebound. This resin is made from a digital model, then the object is printed by a stereolithography (SLA) process and fixed by photopolymerization to ensure high resistance. 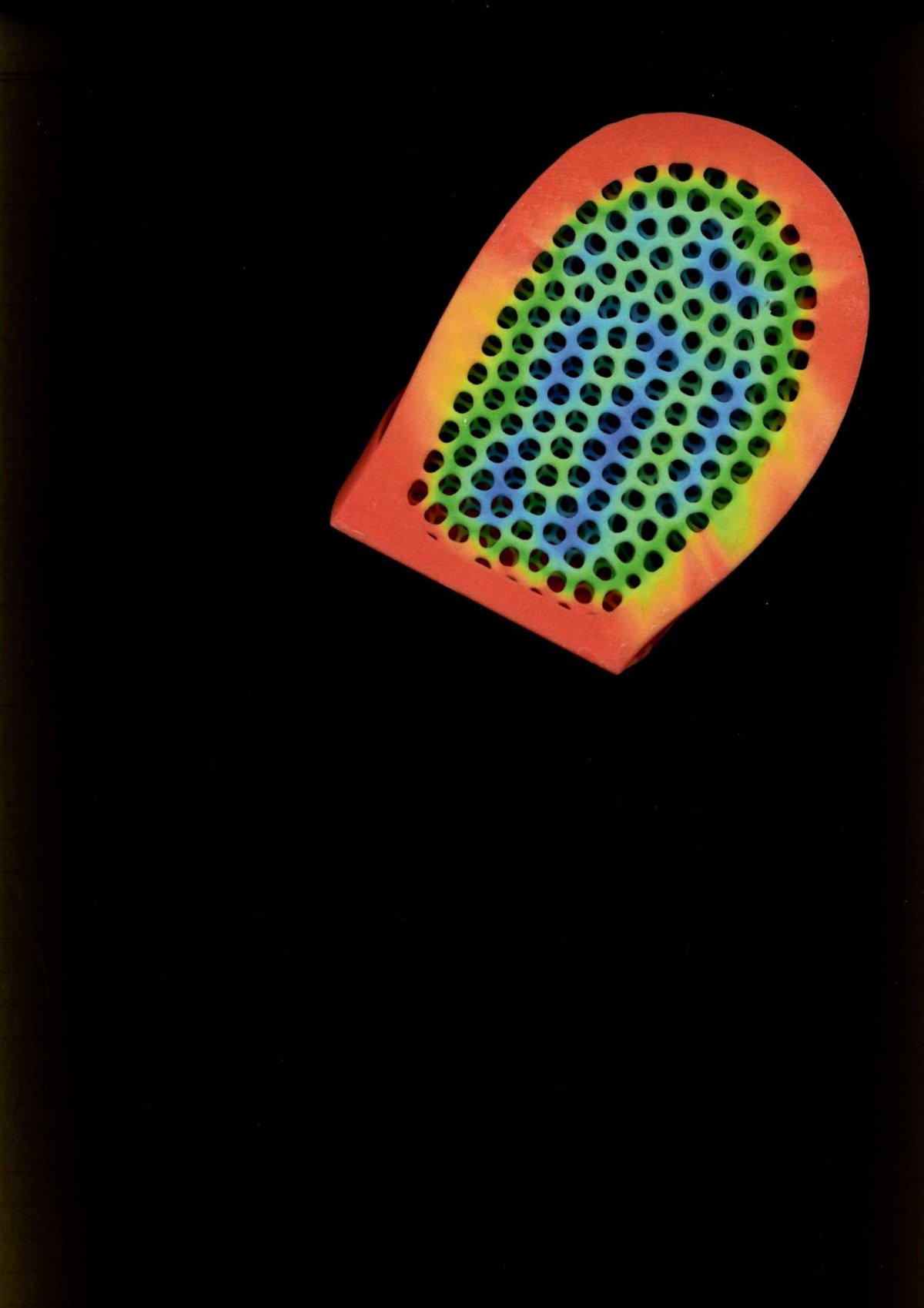 
Reebok in collaboration with BASF
Liquid Factory, 2016
Developed in collaboration with BASF, the Liquid Factorytechnique allows Reebok to imagine news links between the different parts of a shoe, lessen its weight,improve its comfort, support and cushioning. Followinga digital drawing, a robotic arm equipped with aprinting head developed with German company Rampf, overlays polyurethane-based materials on a plaque. Kept at a rather high temperature, the material hardens once laid. The technology was used for thefirst time for the Liquid Speed model, forming a kindof web around the shoe (both the upper and the midsole). The laces and the sole make one and improve the sensations during the race. Three years after its release, the technique is adapted for the use of a new material: gas bubbles form in the liquid when it is laid and transform it into foam, which gives lightness and a powerful cushioning to the sole. Equipped with a sole made of small cushions produced with this technique, the Liquid Zig is expected to be released next year. 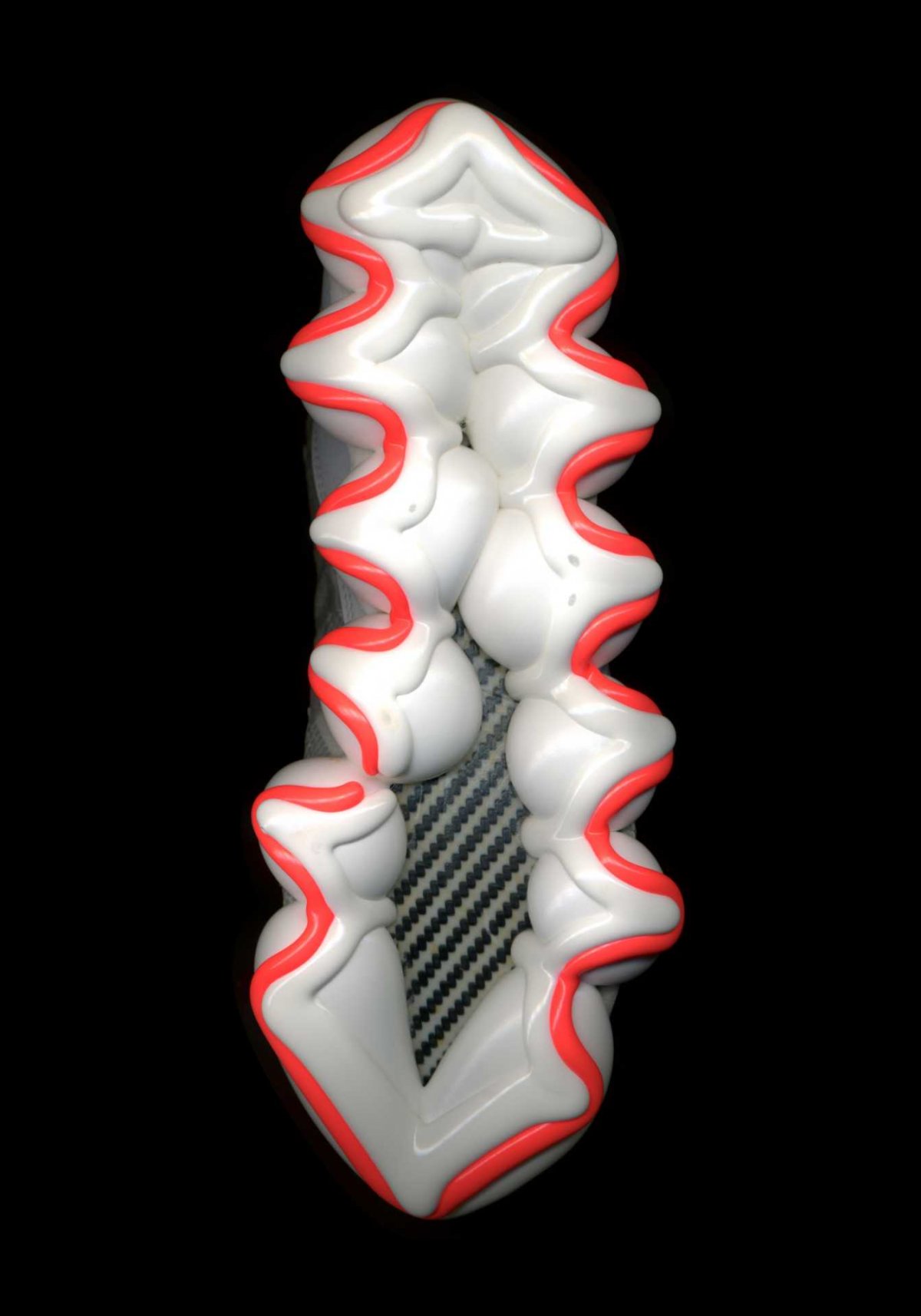 
Nike, Flyprint, 2018
The Flyprint technology allows to create a 3D printedtextile upper. This new material is made out of awoven thin but resistant polyurethane mesh, the shoesare thus very light (only 169 grams). This material is flexible and offers less resistance to friction than a traditional fabric: the shoe is comfortable, breathable and waterproof. The model was designed based on data collected from athletes, the way they run and use their feet. Drawing its process from generative design, this technique allows to create a shoe perfectlyadapted to the foot and the practice of the athlete. Developed in collaboration with the marathon runner Eliud Kipchoge, the Nike Zoom Vaporlfy Flyprint, first shoe made with this technology, was produced in a very limited quantity.

Adidas in collaboration with Carbon
Futurecraft 4D, 2018
After Futurecraft 3D (2015), developed in collaborationwith Materialize, Adidas partnered with Carbon todesign Futurecraft 4D. The sole has been produced using CLIP (Continuous Liquid Interface Production) technology, also called DLS (Digital Light Synthesis), a light-curing process developed by EiPi Systems in 2014, and then used by Carbon. UV images, generated by a digital light projector, are projected under a tank containing liquid resin. The light hardensthe resin, one layer after another. An oxygen permeable membrane, about ten microns thick, placed at the bottom of the tank, prevents the resin from hardening and sticking to the window, in contact with the UV rays. In a few minutes, the object made is out of the tank, way faster than other processes of this type. The result is smooth and requires no further action, unlike other 3D printing modes. The sole is durable, flexible, resistant and has a dynamic cushioning.